I Centri in Italia

Chemo-radiotherapy still represents the standard of choice in locally advanced NSCLC, while to date the addition of target therapies to chemo-radiotherapy did not demonstrate any robust advantage in this stage of disease. Considering the absence of randomized controlled trials, the role of target therapies in early stage adjuvant NSCLC is not yet recommended in clinical practice. On the contrary, in the setting of oligometastatic and oligoprogressive disease, new molecules demonstrated to be safe and effective, opening to a promising and emerging application of the best interaction between new drugs and new modalities of radiotherapy. 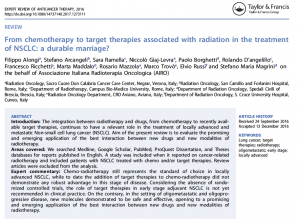